Aimee Valle
Tuesday, June 20, 2006
A Little Slice of Hell That was my today. Let's rewind and I'll explain.

I have been seeing my ob/gyn to get my Effexor XR dosage regulated. I started on 75mg at the recommendation of my psychologist at the time. It wasn't working. I was increased to 150mg after asking my family doctor what to do, and that wasn't cutting it.

My gynecologist got involved after I decided I was sick of going to two different doctors for the same problem. I was seeing him for the PMDD anyway. He and suggested that I up the dose to 225mg. I had already purchased 3 months worth of 150mg and I had about 2 months worth left, so instead of filling the script I just decided on my own to take 300mg.

He told me that anything up to 300mg was safe and not unusual to be prescribed so I figured it was ok. A month later, I had another appointment to see how it was going on that dosage and I explained to him what I had done. I also told him that it had been the best month in a long time as far as my depression, social anxiety, crying spells, mood swings, and PMDD were concerned.

Nonetheless, he thought it would be a good idea if I drop back down to 225mg to see if I could function on that amount. I dropped off the script on Saturday when I was in posession of 3 remaining 150mg capsules.

I called on Sunday and asked if it was filled and the pharmacy told me that the Dr. hadn't specified the "XR" and he didn't write how to dispense the meds so they would have to call him on Monday. I took my single remaining 150mg capsule on Monday before work and I went. It went ok that day, I felt no major difference. I've been a little down since Alfred has been gone and we have been having some disagreements, so I couldn't tell if it was just me or the lowered strength making me sad.

Today came and I had no Effexor left. I called the pharmacy at around 11am and they said they had faxed over the script but got no response. I called the office and the answering service told me the Dr. was out all week. I began panicking. I called the nurse midwife who was covering for my doctor and her office girl said that she would see what she could do. Finally at 4pm she called and told me she had called it in.

Between 12 and 4pm I experienced the weirdest jitteriness, cold sweating, hot flashes and other terrible feelings. I couldn't even see straight. It was like looking through a wide tube. I felt like I was on a major caffeine high and I haven't had caffeine in a week. The worst part was I kept having jerky twitchy muscle spasmy flexions. My jaw was clenched, my arms were flexed and I kept flexing my neck uncontrollably. My breathing was odd, nothing felt right.

I decided to go get some applications at Oglebay at 4:30 and while I was there I took a walk for about 20 minutes around the park. I felt much more relaxed. When I was done, I went by the pharmacy to pick up the cursed medicine. The pharmacist told me that I would have to pay a copay of 50.00 for each bottle (one 150mg and one 75mg = 225mg) and I began to feel overwhelmed. I walked around Kroger's feeling like I would explode into a teary panic. I checked out and got into the car and cried all the way home.

When I got in the door I took off my shirt and lay on the floor crying and crying. I got up, began pacing, walked to the wall and sobbed into it. I cried for my husband, I cried for someone to help me, I cried for myself because I felt helpless and hopeless and out of control of everything in my life.

I pulled myself together after 45 minutes or so and took one of each of the pills. Soon, I felt better. Not "perfectly" better, but better. It only took about an hour.

I don't know what's wrong with me. I don't want to depend on something to make me feel right, but I'm afraid to see what would happen if I was without it for any length of time.
For now, I will take it and be the best that I can be. Hopefully soon, I will get my dosage regulated.  ¶ 6:12 PM 1 comments

Sunday, June 18, 2006
A Lesson Learned & Unfortunate Happenings Whenever a person tells you that they don't want anything for their birthday, or that gifts don't matter it's spending time together that's important, don't listen because they're lying to you.

Gifts do matter. Even if you're broke, sell a kidney or something and buy them a damn gift. They probably won't like it anyway, but they can't hold it against you and make you feel like the biggest piece of walking human waste the way that they can if you don't get them anything at all.

Take it from me, the biggest piece of walking human waste ever to walk the face of the Earth. 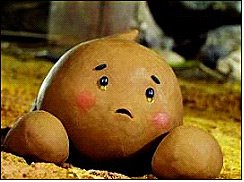 My poor Alfred...He is still not in Costa Rica yet. Yesterday his flight to Miami left on time at 1:49 and arrived as scheduled at 4:33.

The plane to San Jose was supposed to leave at 7:23, but the passengers were told that it would be delayed. They took off at somewhere around 11:00, and about two hours into the two and a half hour flight, they determined that there was an engine problem and they would be returning to Miami. It seems that the logical thing would be to get to San Jose, since they had traveled so far already, but I'm sure they had their reasons.

The passengers were given vouchers for hotel rooms, and they were told they would be taking off at 11:00 am. At 9:00am Alfred got to the airport early and they told him that they would be delayed until 1:00pm.

So far he hasn't called me, and his phone is turned off so I'm assuming he is in the air once again bound for San Jose. Hopefully he makes it all the way safely this time.  ¶ 1:48 PM 0 comments