As you know if you've read much of my posts, I'm a Nintendo fan. I spend a lot of my time visiting the Nintendo NSider Forum. Well, it's almost time for something called Camp Hyrule. From the official site:

What is Camp Hyrule?

It's Nintendo's biggest online event of the year! Camp Hyrule is a free virtual online summer camp where video game fanatics can become immersed in the world of Nintendo.

This year, registration for Camp Hyrule is scheduled to take place July 25 - July 27 right here at CampHyrule.com. Each and every registered camper is assigned to a virtual cabin, where he or she can meet other gamers and interact with Nintendo's gameplay experts in exclusive Camp Hyrule chat rooms and message boards. Daily events include live chat shows, games, art activities and surprises galore from Nintendo Power Magazine.

If you like to talk about video games, play practical jokes and rub elbows with Nintendo's expert gamers, then pull out the tanning lotion and get ready to meet new friends at Nintendo's Camp Hyrule 2006. Coming the week of August 14, 2006.

I'm looking forward to taking part in this annual event for the first time and hopefully being in the winning cabin so that I get a shirt!

2006 will go down in history as the least eventful 4th of July I have ever had. It rained pretty much all day. While it wasn't too soggy for the neighbors' bottle rockets and m80's, it was too wet for the real fireworks to take place so they postponed them. Not that we were going anyway, because we decided to stay in and skip it.

On the medical front, we're noticing that I really need 300 mg of Effexor XR. I'm not the same on 225. I'm worried that it's causing weight gain but Alfred says that if I fix my head I'll feel like eating better and working out and then I'll lose weight.

Today's News I Couldn't Pass Up
Ok, I would be so embarassed if this happened to me. Just think about it. If you've ever had some food on your face or a visible booger in your nose, how did you feel? This guy must have felt like that times a thousand.

KOLKATA, India (Reuters) - Hundreds of people are thronging a hospital in the eastern Indian city of Kolkata to see a patient holding a piece of his own skull that fell off.
Doctors say a large, dead section of 25-year-old electrician Sambhu Roy's skull came away Sunday after severe burns starved it of blood.

"When he came to us late last year, his scalp was completely burned and within months it came off exposing the skull," Ratan Lal Bandyopadhyay, the surgeon who treated Roy told Reuters 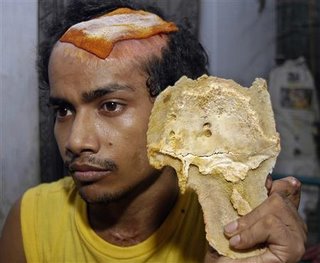 Wednesday.
"Later, we noticed that the part of his skull was loosening due to lack of blood supply to the affected area, which can happen in such extensive burn cases."

The piece came off Sunday and hundreds of people and dozens of doctors now crowd around his bed, where he lies holding the bone.

"When the skull came off, I thought he will die, but we noticed a new covering on his head forming and that might have pushed the 'dead skull' out," he said.
While possible, such cases are extremely rare.

Roy was injured and almost killed when he was electrocuted while repairing a high voltage wire last October.

"Doctors say a new skull covering has replaced the old one, but I am not letting go of this one," he told Reuters.

He intends to keep his prized possession for life and not hand it over to the hospital when he leaves: "My skull has made me famous," he says.

Yep, ewe better believe I have a sheep story to accompany the second sheep of the day picture! Sit tight, it's a long one.

BBC News-Professor Ian Wilmut, a member of the team that created Dolly the cloned sheep, says he is "disappointed" that Britain is no longer cloning animals.

It is exactly 10 years since the Finn Dorset lamb was born at the Roslin Institute near Edinburgh. She was the first mammal to be cloned from an adult cell - making her a genetic replica of a six-year-old ewe. The "copying" of farm animals in the UK has now ceased because of cut-backs in agricultural research. 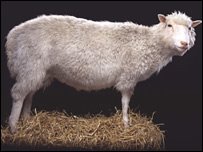 Professor Wilmut says the UK has once again failed to capitalise on a technology it pioneered.
He told BBC News: "I think that it is very difficult for a small country like this to develop fully something which does have great international value, because once that's recognised the science will move elsewhere.

"And in a sense, that's a compliment to the science: the technology was very important and is now being exploited commercially in Japan and the United States, all sorts of different countries."

Dolly was produced through a technique known as somatic cell nuclear transfer.
There are a number of variations, but essentially it requires the genetic material from a donor cell to be placed inside an egg that has been emptied of its own DNA. The new entity is coaxed in the lab to start developing as an embryo, which is then placed in a surrogate mother and brought to term.

It is an inefficient process which requires large numbers of experiments to produce one live, healthy birth. Nevertheless, the first sheep clone was rapidly followed by other mammals, including mice, rats, cattle, pigs, goats, horses, rabbits, and even cats and dogs.
The technology was originally intended to be used for making copies of farm animals that had been genetically engineered to produce pharmaceutically useful proteins in their milk. This practice, known as "pharming", is now being pursued vigorously overseas.

So, too, is the simple copying of livestock of known high yield.

Wilmut himself is using the technology to study the cell behaviour of humans with motor neurone disease. He hopes that by understanding what goes wrong in these patients, it may be possible to develop therapies in the future.

"In that particular case, you could produce nerve cells that are equivalent to the person at the time when the symptoms first began to appear. You can't get those cells in any other way at the present time."

The application of cloning technology to human biology in the past 10 years has been hugely controversial - although neither the early fears of cloned babies nor the hopes of "miraculous" cures have been realised.

"We've certainly gained some knowledge because cloning is such an inefficient technique," reflected Dr Susan Meyer, of the research and campaign group GeneWatch UK.

"It goes wrong so often, we've gained a lot of knowledge about how cells differentiate and how organisms grow but we haven't reached these expectations which were generated - the hype and the promise about personalised treatments.

"I think it is time to reflect a bit about whether we aren't getting too carried away."
Dolly died in 2003. She was put down after contracting a common lung disease. Her stuffed remains are on show at Edinburgh's Royal Museum.

"When we do taxidermy, we like to capture the character of an animal, and we're also keen to show particular behaviours," Andrew Kitchener, from the National Museums of Scotland, told the Archive Hour on BBC Radio 4.

"Dolly is displayed standing on all fours on a plinth, which is covered in straw and a few sheep droppings. Her head is turned slightly to the left, and she's looking adoringly at her inquiring audience." 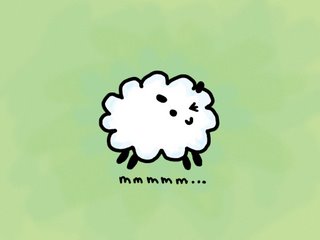 Tuesday, July 04, 2006
Sheep of the Day Since I don't have any recurring theme here, I've decided that every time I post, I'm going to include a picture of a sheep until I think of a different theme or I get bored of sheep. It could be something that I drew and scanned in, or something I find on the internet. It can be anything, as long as it's sheep. Enjoy. 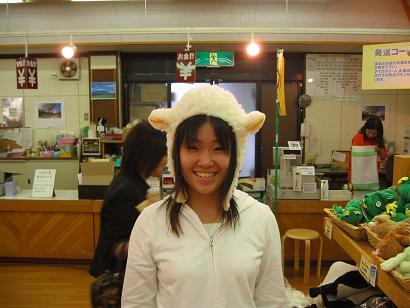